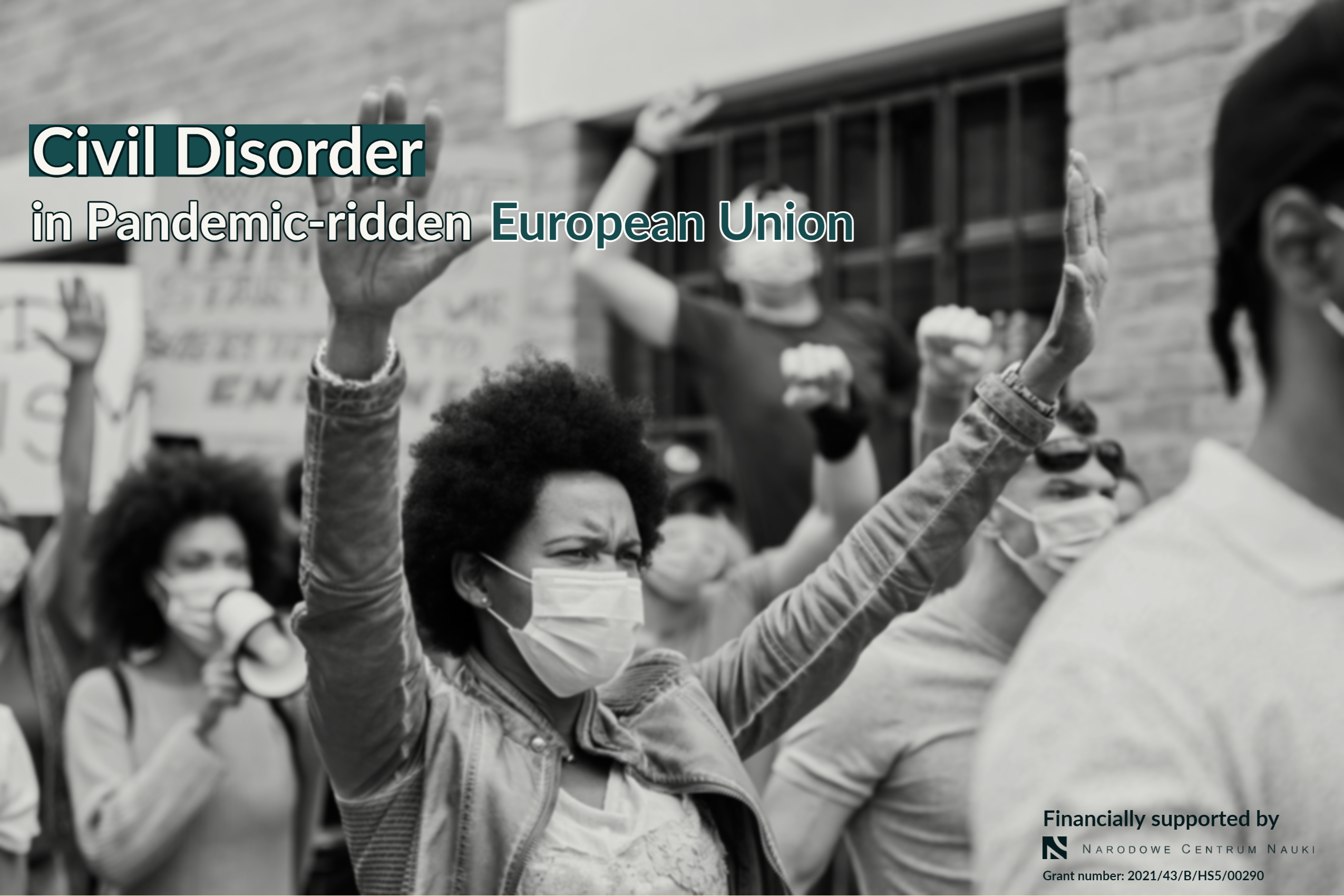 The need to understand the emergence and dynamics of civil disorder grows with the increasing use of street protests to manifest views. 2019 is called “the year of the street protest” due to the large number, scale, brutality, and diversity of demonstrations held worldwide. At the beginning of 2020, more than 100 governments imposed a national lockdown to prevent the spread of the coronavirus, restricted civil rights and movement for some or all their citizens. By April 2020, the number and size of demonstrations decreased by 50% compared to 2019 levels. However, it was only a temporary decline noted at the beginning of the year. Finally, in 2020, the rates increased by 7% compared to 2019. Unexpectedly to the ruling, the turnout during public gatherings was bigger than before the pandemic. People took to the streets despite the threat to their lives and health and restrictions of civil freedoms. Protesters opposed precautions introduced to limit virus transmission, failed and inadequate governmental responses to the pandemic, and unwieldy health systems. Moreover, the protests that had started before the pandemic re-emerged. They were aimed at, e.g., a gradual decline in the quality of democracy, public sector mismanagement, corruption, electoral manipulation, unemployment, and police brutality. The wave of protests challenged the stability and legitimacy of governments and political systems across the globe once again. Despite those similarities, some protests turned violent, whereas others did not. This puzzle has inspired the research project.

Accordingly, the research problem concerns the possible causes of the transformation of the collective action into civil disorder and the dynamics of this phenomenon across the EU during the coronavirus pandemic. The cause-seeking problem is theory-informed and thus inquires the relationships between civil disorder and public order policing. The major scientific goal of the project is to advance a middle-range theory that would explain the sources of civil disorder in pandemic-ridden EU. Growing out of the scholarship on the backfire consequences of police’s control behaviour, the proposed theory would account for why collective action transformed into civil disorder in some cases, while in others not, what was behind differences in the range of civil disorder and the losses it involved.

Under what conditions does collective action transform into civil disorder, the latter continues, discontinues, and changes over time? The study addresses these questions by testing hypotheses based on the theories indicating that collective action transforms into civil disorder, and the latter continues and changes over time under two conditions, i.e., the model of protest policing or the selected dimensions of protest policing and the level of police’s partisanship when securing public gatherings. The project assumes the use of the qualitative method of intertextual source analysis to address the research questions. The sources include the Global Protest Tracker, Covid-19 Disorder Tracker, the GDELT database, and police-produced materials. The source analysis draws upon the qualitative techniques of conceptual content analysis and thematic analysis. At the stage of interim data analysis, project participants will use multi-value qualitative content analysis to provide a deep understanding of qualitative differences across cases in individual states and generalise empirical observations to regions of the EU if possible. At the stage of holistic data analysis, linear regression analysis will be used to infer causal relationships between the explaining and explained factors, which will allow for the development of the middle-range theory.

Understanding the dynamics of collective action and its transformation into civil disorder is important to plan how to establish relationships between public gatherings participants and police, secure assemblies, and maintain public order. The greater knowledge of the civil disorder and the role of social control agents in its dynamics could help reduce the number of victims on both sides of the conflict. Police could apply such knowledge to understand the consequences of public order policing. It can also be applied by the state crisis management centres, security centres, and their decision-making subjects to increase the efficiency of crisis management plans and programs to protect critical facilities. Critical facilities require appropriate protections because they are vulnerable to civil disorders and may become focal points during protests.

Associate professor at the Faculty of Political Science and Journalism, Adam Mickiewicz University in Poznań. In 2016-2020, she was a visiting researcher and professor at CEU San Pablo University in Madrid and Charles III University of Madrid. She worked on the following research projects: „Researching Anti-austerity Movements in Comparative Perspective”, „Basque Revitalization: The Continuance Trajectory of ETA” i „Współczesna Rosja: między autorytaryzmem a totalitaryzmem?”. The author of books and articles on contentious politics. The laureate of, i.a., Scholarship by the Minister of Science and Higher Education for outstanding young scientists, the Barbara Skarga Scholarship, START Scholarship by the Foundation for Polish Science, and Scholarship for young researchers from the Poznań scientific community. She obtained the first place in the competition of the Polish Political Science Association for the best scientific article published in the peer-reviewed scientific journal or collective work in Polish in 2016-2017 as well as a distinction in the Czesław Mojsiewicz All-Polish Competition for the best doctoral dissertation in the discipline of political sciences in 2016. Research interests: cultures of political violence, contentious politics, and social mobilization. Contact: joanna.rak@amu.edu.pl.

The head of the Department of Theory of Politics at the Nicolaus Copernicus University in Toruń. For several decades, he has been dealing with the issues of non-democratic political regimes, and above all totalitarianism. A special area of interest are the processes of the collapse of political regimes. The basic theoretical models, in this case, are the author's theories of political bifurcation and the concepts of militant democracy modified together with Joanna Rak. In addition, he created original frameworks of theoretical categories allowing for conducting explanatory studies of political thought (typologies based on the Pareto division, according to the types of relations between subordinate and dominant cultures, etc.). Together with the team, he wrote a handbook on the methodology of political science research (open access, 2016). He is the author of seven books including Nontraditional Theory of Politics (Toruń, 2011); Interwar Eurasianism. Between Counter-acculturation and Totalitarianism? (Łódź 2000); Russian Political Thinking under President Putin (Toruń 2007).

Head of the Department of Political Systems at the Faculty of Political and Security Studies at the Nicolaus Copernicus University in Toruń. She completed scientific internships and was a visiting professor at several universities, including the Kyrgyz-Russian Slavic University in Bishkek (Kyrgyzstan), the Baku Slavic University (Azerbaijan), the Al-Farabi Kazakh National University (Kazakhstan), the Grigol Robakidze University (Georgia), Pavol Jozef Šafárik University in Košice (Slovakia) and the Gori State Teaching University (Georgia). In 2012–2016, she was the coordinator of research grant entitled “Politics of Memory as the Constitutional Factor of New Identity during the Transition from Authoritarian Regimes”. Author of books and articles on European parliamentarism, Asian affairs, political systems, and constitutional systems in the world. Scholarship holder of the Polish Historical Mission at the Julius Maximilian University of Würzburg. Director of the Centre for Eastern Studies and Vice-President of the Toruń branch of the Polish Political Science Association. Editor-in-Chief and member of the editorial boards of many prestigious scientific journals.

PhD candidate in political science in the Department of the Political System of the Republic of Poland at the Faculty of Political and Security Studies, Nicolaus Copernicus University in Toruń as well as Secretary of the Board in Polish Political Science Yearbook. A graduate of master’s studies in political science and undergraduate studies in public policy. During studies she was awarded the title of the best student of the faculty, and later the best graduate. Her research interests include mainly the relationship between the state and the Church, the concept of agenda-setting, and political systems. Analytical skills, knowledge of English, interests and completed studies allow her to efficiently obtain data, build databases, as well as verify and develop them under the grant OPUS 22.

Graduated in International Relations at the Faculty of Political Science and Journalism at Adam Mickiewicz University in Poznań. He actively participates in scientific conferences on political sciences and contemporary history. He is an author of publications about contemporary politics. His scientific interest focuses on opposition in post-communist states in CEE, democratic backsliding in CEE

Ph.D. student in Political Science and Administration. She holds a degree in National Security from Adam Mickiewicz University. Her research interests focus on repression of citizens in democratic countries, as well as social movements working for women's rights and the LGBT+ community.